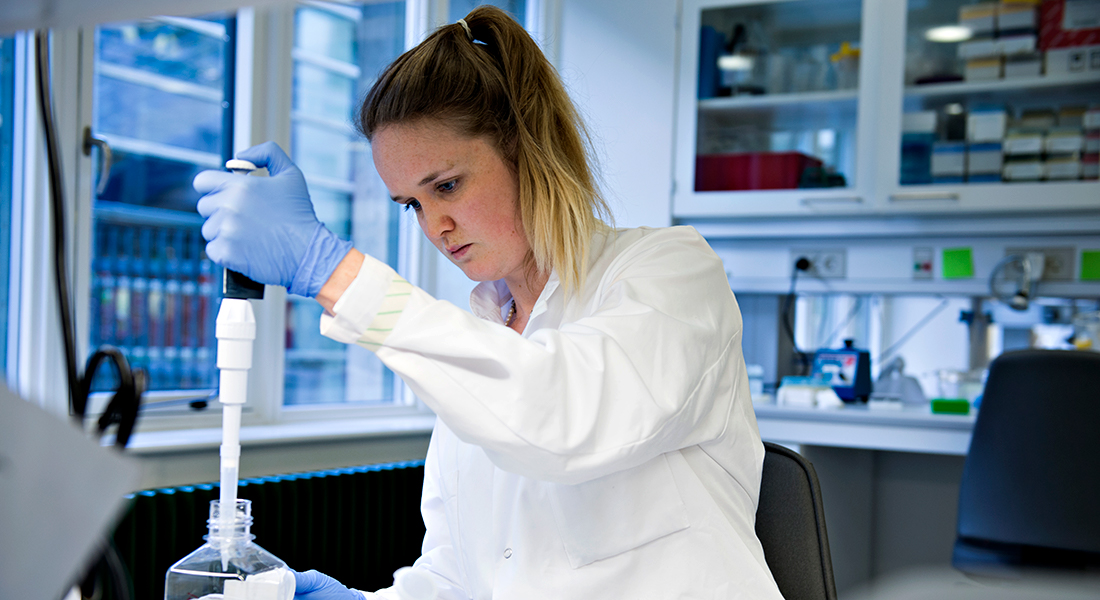 Biofilms are communities of aggregated bacterial cells embedded in an extracellular polymeric matrix, and they are associated with numerous chronic infections since bacteria in biofilms are tolerant to antimicrobial treatments and host immune defenses. Recent research suggests that the molecule cyclic diguanosine monophosphate (c-di-GMP) constitutes a ubiquitous intracellular regulator of bacterial biofilm formation. High levels of c-di-GMP induce formation of biofilms, whereas low levels of c-di-GMP induce a planktonic bacterial lifestyle. The level of c-di-GMP in bacteria is determined by diguanylate cyclases (DGCs) and phosphodiesterases (PDEs) which contain characteristic GGDEF and EAL/HD-GYP domains as well as regulatory domains. The research project is aimed at obtaining knowledge of the regulation of the activity of DGCs and PDEs, as well as on identification of down-stream c-di-GMP affecter proteins. This knowledge may reveal novel molecular targets for new drugs that can prevent or cure biofilm infections.

Basically, bacteria display two life forms during growth and proliferation. In one form, the bacteria appear as single, independent cells (planktonic), and in the other form bacteria are organised in sessile aggregates. The latter form is commonly referred to as the biofilm phenotype. Acute infections are assumed to involve planktonic bacteria, and are generally treatable with antibiotics, though successful treatment depends on accurate and fast diagnosis. However, in cases where the bacteria succeed in forming a biofilm within the human host, the infection often turns out to be untreatable and will develop into a chronic state.

The important hallmark of chronic, biofilm-based infections is extreme resistance to antibiotics, as well as a number of other conventional antimicrobial agents and an extreme capacity to evade the host defense. In addition, since the bacteria in chronic infections are aggregated, resistance genes can be passed from one bacterium to the other.

Evolution of antimicrobial resistance and treatment of pathogenic biofilms

The primary interest of the group is to cure persistent, chronic infections due to bacterial biofilms and the goal is to improve the treatment of this type of infections by interfering with the bacterial evolution, by enhancing the activity of antibiotics and by employing phage therapy.

Biofilms formed by opportunistic pathogenic bacteria can resist immune defenses and antimicrobial therapy, and therefore cause considerable problems in medical settings. However, if forced away from the protective biofilm-state to a free-living planktonic mode, the bacterial cells become susceptible to the action of the immune system and antimicrobials. Current research indicates that the secondary messenger c-di-GMP is a general controller of the biofilm lifestyle in bacteria. High internal levels of c-di-GMP induce production of extracellular matrix components which promote biofilm formation, whereas low c-di-GMP levels down-regulate the production of extracellular matrix components and lead bacteria to the planktonic mode of life. We use a high-throughput screening approach for identification of compounds that can reduce the c-di-GMP content in bacteria. Such compounds are expected to serve as lead molecules for the development of drugs which can interfere with biofilm formation, and cure problematic bacterial infections.

The Danish Council for Independent Research, the Lundbeck Foundation, and the Novo Nordisk Foundation.

It is well established that bacterial biofilms are more tolerant to antibiotics than planktonic bacteria. Several factors are known to play a role in the high antimicrobial tolerance displayed by biofilms, including restricted antibiotic penetration, physiological heterogeneity, and induction of specific antibiotic tolerance genes. However, more knowledge is warranted about antibiotic tolerance mechanisms in order for us to develop effective treatments against biofilm infections. This project focuses on obtaining knowledge about the role of the extracellular matrix, differential growth activity, and heterogenic gene expression in biofilm-associated antimicrobial tolerance.

The Danish Council for Independent Research.

The Danish National Institute of Public Health has implemented the population study “Danish Health Examination Survey with Focus on Lifestyle and General Health”. To this study is linked an odontological examination called The Oral Health Study.

The main purposes of this study are:

One of the most important characteristics of biofilms is that the bacteria in these sessile microbial communities display a remarkable increased tolerance to antimicrobial attack. Because of their innate resistance to host immune systems, antibiotics, and biocides, biofilms are difficult, if not impossible, to eradicate. Biofilm formation therefore leads to various persistent infections in humans and animals.

Because the use of conventional antimicrobial compounds in many cases cannot eradicate biofilms, there is an urgent need to develop new ways to prevent biofilm formation or to remove existing biofilm. We have initiated a research project aimed at obtaining knowledge about the molecular mechanisms which underlay tolerance to antimicrobial agents in oral biofilms. Such knowledge is necessary in order to develop compounds which can interfere with tolerance development, and thus make the biofilms susceptible to conventional antimicrobial compounds.

Projects focussed on these issues are currently funded by: Tandlægefonden.

Bacterial biofilms may cause chronic infections due to their ability to evade clearance by the immune system and antibiotics. The persistent biofilms induce a hyper inflammatory state that damages the surrounding host tissue. Knowledge about the components of biofilms that are responsible for provoking the harmful but inefficient immune response is limited. In this research project we study the role of extracellular biofilm matrix polysaccharides in activation of polymorphonuclear leukocyte (PMN) responses towards biofilms.

The Danish Council for Independent Research.

Skin microbiology in health and disease

Atopic dermatitis (AD) is a common, chronic skin condition associated with allergies, itching, sleep disruption and reduced quality of life. Certain bacteria, e.g. Staphylococcus, exhibit increased growth on the skin of AD patients compared to healthy controls. It is unknown whether changes in skin bacteria composition (the so-called “microbiome”) precede eczema, or vice versa. Staphylococci, particularly, increase in numbers during eczema exacerbation and cause serious infections, but repeated use of antibiotics may lead to bacterial resistance. Consequently, it is difficult for clinicians to properly administer disinfectants and antibiotics to prevent AD and flare-ups. Our projects will follow large groups of healthy adults and newborns and adult patients with AD to determine the role of skin bacteria in AD. The findings will help clinicians identify the correct treatment strategies to prevent and treat AD, as well as assist drug developers to develop improved patient solutions.

Funded by:
The LEO Foundation: The spatial composition and distribution of the cutaneous microbiota in atopic dermatitis and healthy skin.

The Novo Nordisk Foundation Tandem Program 2019: The temporal and physiological importance of inflammation and bacteria in atopic dermatitis, in Collaboration with professor Jacob Thyssen, Gentofte Hospital